An Unlikely Hero: Former Prolific Offender Saves the Life of a Client

We all think of ourselves we will act as heroes when a time of need comes. But most would freeze in panic or simply do nothing when that time comes. That was not the case with Jeff Rochford, a former Stockton offender turned window cleaner. Last Monday he was doing his cleaning round when he noticed there was something wrong with one of his clients – the 78 years old June Hoyle. She was acting a bit strange and not like herself, so he called an ambulance to check on her. When they came it was found out she was having a stroke and immediately took her to the hospital.

Jeff Rochford’s past is shady. He was a regular visitor of his local court of justice, having the amazing number of 80 convictions on his record. But the 36-years-old closed that part of his life and is now a fully-functional member of society who trains to become a mentor to help other offenders take the turn in their life like he did.

So there he was, on his regular window cleaning route on, when he noticed Ms Hoyle was looking ill. “She wasn’t her usual lively self and then I saw that her face had dropped a bit. I was concerned so I called for an ambulance.” he said later in an interview. “I waited until they arrived and then her son came round that night to tell me she had had a stroke and thanked me.” 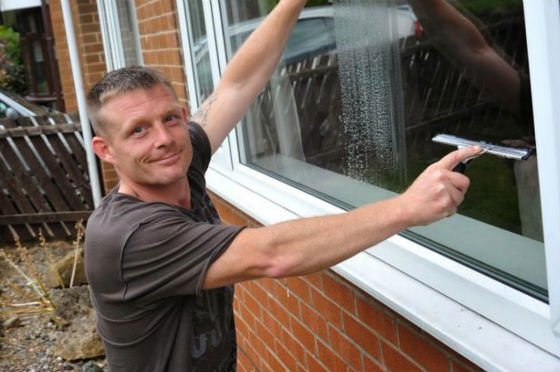 The son of June Hoyle, Dennis, couldn’t be luckier with his mom’s choice for a window cleaner. He was entirely grateful to the efforts of Mr Rochford. “Everyone knows that the longer you leave a stroke the worse it gets. Jeff’s actions made sure mum got to hospital quickly. God knows how long it would have been if he had not been there.”

The future that awaits Jeff is inevitably connected with his past. He already has a diploma in peer mentoring for level one and two. He regrets his past and is determined to help other offenders change their life to better as he did.

Jeff Rochford is an example that everyone deserves a second chance. He should be an inspiration not only to the window cleaning business, but to the whole world, that a person can change for better. We at Shiny Window Cleaning wish Mr Rochford all the best for the future and to Ms Hoyle a fast recovery.

You can read the original Gazettelive article here.

You can leave a response, or trackback from your own site.